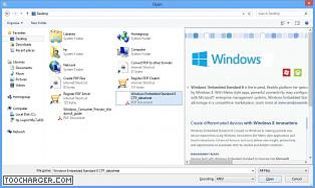 By default windows 10 does not have the ability to preview pdf files like images in windows explorer or other apps like office 2013. Pdf preview allows pc users to preview pdf file in windows 10 without opening. This freeware tool installs pdf preview add-in for windows explorer, microsoft office, and microsoft outlook, and automatically configures itself to preview a pdf file in the preview pane of windows explorer or in the reading pane in outlook 2013, 2010, 2007. Once installed, the application also shows a thumbnail preview for icons and also the icon changes to the one from pdf preview. However, it cannot preview password protected pdf files. This freeware program is specifically designed for windows 10, and works on both windows 10 64-bit and windows 32-bit systems. The software outperforms its peers both in speed and stability. Pdf preview features include, preview pdf document pdf document can be previewed in thumbnail when it is not opened via the preview handler interface in microsoft windows 10. Thumbnail pdf icon the icon of your pdf document is generated on the fly according to the content of the first page in your pdf document. Support pdf files of all versions just install the software, and it works with all versions of pdf files. Fast display the preview thumbnail can be displayed instantly after you mouse click on it. High-quality rendering pdf preview for windows 10 gives your pdf files a high-quality preview thumbnail. Work with 86 different languages pdf files with asian, hebrew, arabic et al fonts can be opened and viewed without difficulty. 64-bit optimization on windows 10 64-bit operating system, pdf preview works as twice as much faster than on 32-bit. Note: the free product can be used for commercial and non-commercial use. Compatible with microsoft windows server 2012. Incompatible with microsoft windows xp operating systems.